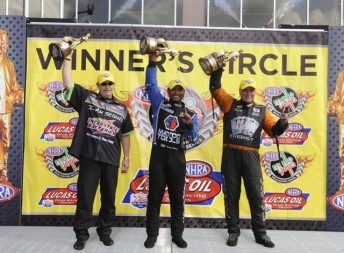 Mike Edwards, Antron Brown and Johnny Gray got the “Wally’s” in Atlanta

It may have taken a week due to inclement weather, but Antron Brown took out the NHRA Mello Yello event at Atlanta, defeating Brandon Bernstein in the final, whilst Johnny Gray and Mike Edwards took out Funny Car and Pro Stock respectively.

Brown advanced to the final through getting past Pat Dakin, Spencer Massey and Doug Kalitta, whilst Bernstein accounted for Terry McMillen, Khalid alBalooshi and top qualifier, Shawn Langdon.

“This track’s been real special to me,” said Brown. “It reminds me of going to a racetrack in my hometown. It’s been around forever, and it has that special atmosphere with great fans that pump you up. You get that aura of the passion for the sport that they have. Everybody was running so strong this weekend that it was monumental for us to get the job done.”

He has now moved to second on the Mello Yello points table, just five points adrift of leader, Tony Schumacher who exited in the second round.

Australian Dave Grubnic was eliminated in the first stanza by alBalooshi, whilst this was one of the races sat out by Rapisarda Autosport International, who’s driver, Larry Dixon stated he was ‘extremely shocked’ by last week’s news that Lee Beard had departed suddenly for Steve Torrence’s outfit. Torrence was taken out in the first round by Massey after qualifying 10th.

Johnny Gray was another to record his second win of the season, beating home a resurgent Matt Hagan in Funny Car.

Hagan has moved to 13 points behind Series leader Cruz Pedregon, whilst Gray has moved to third in standings.

The winner admitted that the win has brought him out of a mini slump of poor form that has been affecting him lately.

“We got overcenter here for a couple of races and struggled pretty good,” said Gray. “The car was getting really inconsistent, and the boys made the election just to back the thing way down, get way over on the soft side, and start picking their way back up. I didn’t know they’d pick it up quite that quick, but they picked on it pretty good today. The thing came back real strong.”

The veteran racer got to the final after a tough day at the office, having to run against Robert Hight, Ron Capps and Cruz Pedregon before defeating Hagan! Hagan got by Tony Pedregon, fan favourite John Force and Tim Wilkerson on his way to the decider.

Mike Edwards continued his strong run this season in Pro Stock by taking victory and opening up his lead in the Championship to 126 points.

He beat out Shane Gray – the son of the Funny Car victor – after earlier having to get around Warren Johnson, V. Gaines, and Greg Anderson on his way to the final.

Gray got to the final through eliminating Erica Enders-Stevens, Kurt Johnson and Jeg Coughlin Jr – who now moves to second in the points standings.

Most impressive was Gray’s reaction times, including back-to-back .002 and .001 starts in the semi’s and final. Edwards was too tough and got around him though.

Despite his dominance of the category this year, Edwards admits the competition is getting tougher on a week-by-week basis.

“The competition is amazing,” Edwards said. “Pro Stock is just a great class. It’s fun to be a part of, but I’ll tell you what, the older I get, my nerves are getting shot. It’s tough. Them guys are so good. They pull up there and just pop them .00s on you. Man, we made a real nice run in the final. I was a little worried because that was the first time we were going to be the first pair out, but it made a sweet run. It’s all good when you win.”

The next round of the 2013 Mello Yello NHRA Drag Racing Series will be at Heartland Raceway Topeka next weekend for the Kansas Nationals.