Sykes shoots to pole in Monza

Sykes shoots to pole in Monza 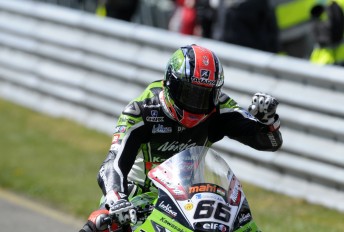 Tom Sykes will start round four of the World Superbike Championship from pole position after coming through a closely fought Superpole at Monza.

The Kawasaki rider showed strong pace throughout qualifying but he saved his best until last to see off Assen race winner Eugene Laverty to secure the top berth.

Local rider Marco Melandri, could only manage to post a time good enough for fifth on the grid.

The big story leading into the three Superpole sessions was the absence of 2011 world champion Carlos Checa.

The Spaniard aggravated a shoulder injury forcing on the sidelines for the remainder of the event thus reducing the field to 18 riders.

Presented with a dry track for Superpole 1, the session was decided by the slimmest of margins. BMW rider Melandri had dominated the previous two timed qualifying sessions held yesterday and earlier Saturday morning but his reign at the top of the time sheets was to come to an end.

Aprilia rider Guintoli topped the session by just 0.180seconds from Laverty, who was only two hundredths quicker than Sykes. However, at the opposite end of the grid, Australian Mark Aitchison fell just shy of progressing to Superpole 2 and will line on the grid in 16th position.

Superpole 2 proved to be another equally close session and in the end it was Sykes who came out on top ahead of Guintoli and Laverty.

Chaz Davies and Rea couldn’t have been closer for fourth as they posted exactly the same times. But in the end Michel Fabrizio, Loris Baz and Ayrton Badovini all missed out on the securing a spot in the final nine to battle for pole respectively.

In the end, the battle for pole position came down to a fight between Sykes and Laverty with the Kawasaki man prevailing by less than a tenth of a second.

Guintoli’s last ditch effort netted him third on the grid ahead of Rea, Melandri and Althea Aprilia’s Davide Giugliano. Fixi Crescent Suzuki duo of Jules Cluzel and Leon Camier were seventh and eighth with Davies completing the order in ninth.