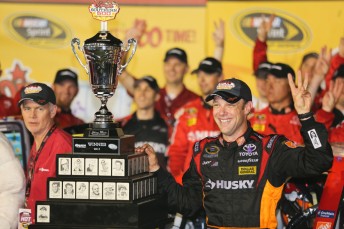 Matt Kenseth has scored his third win of the NASCAR Sprint Cup season with victory at the Bojangles Southern 500 at Darlington Raceway in South Carolina.

In a race that was dominated by his Joe Gibbs Racing team-mate Kyle Busch, who led 265 of the 358 laps, it was Kenseth who took the lead 12 tours from the end and took it through to the chequered flag.

Busch slipped back to sixth at the finish as his car quickly went away after a slow leak in one of his tyres after the final re-start on lap #337.

The race was dominated by long green flag runs with the first caution not coming until Lap #124 for debris. The long runs suited Busch who was able to stretch his advantage on the track and pick his time to come to the pits.

Kenseth was in or around the top-five all night and put himself into position to challenge for the win after the fifth and final caution. That was called after Kasey Kahne brushed with Busch and slid to the wall after a previous re-start while battling for the lead.

Kahne had to come to the pits for repairs and went on to finish 17th.

For Kenseth it was in effect his second win of the week, after penalties for post-race infringements at Kansas were reduced at a NASCAR appeals hearing during the week. However, a suspension to his crew chief Jason Ratcliff remained and engineer Wally Brown stood-in during the race and immediately increased his credentials.

“I hope nobody wakes me up,” said a jubilant Kenseth in Victory Lane.

“This is such a blessing and dream come true. It’s great working with Kyle and Denny (Hamlin), plus all the crew chiefs work well together.

“I had been really loose off the corner and I don’t know what they did at the last stop, but it really tightened it up.

“After the last re-start I didn’t think we were going to run him down and pass him necessarily, but I knew that was our best chance of the entire race.”

After being out of the car since 24 March with a back injury suffered at California Speedway, Denny Hamlin made his fulltime return to the seat of the #11 Joe Gibbs Racing Toyota in style with second place while the Hendrick Motorsport Chevrolets of Jeff Gordon and Jimmie Johnson picked-up third and fourth.

It was long hard night for Australia’s Marcos Ambrose who battled an ill-handling car all race to finish in 34th and nine laps off the lead.

With the long green flag at the start, the Tasmanian quickly slipped down the order and once the pace cars came, he was already three laps off the lead. His Richard Petty Motorsports crew tried a raft of changes, but it didn’t help as he continued to fight the car throughout the night.

He will be hoping for better fortunes next week when he lines-up in the Sprint All-Star Race at Charlotte.