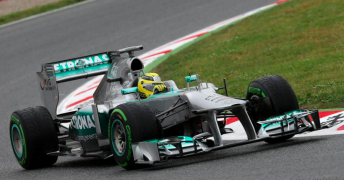 Nico Rosberg has claimed his third career pole position by leading Mercedes to a one-two in qualifying for the Spanish Grand Prix.

The Mercedes factory team demonstrated it has made significant progress in time for the first European grand prix of the season with Rosberg sitting on the front row and sidekick Lewis Hamilton lining up beside him.

Rosberg quickly confirmed the new-found pace of the Mercedes in the first half of the 10-minute top ten shootout by registering a decent banker lap of 1:20.824s. It was a time only he would better in the end.

Vettel’s team-mate Mark Webber had a disappointing Q3 with his only single flying lap good enough for eighth.

With just over a couple of minutes remaining only half of the top 10 had posted laps.

Fernando Alonso, who had a fling at Rosberg’s time earlier, led a procession of cars out of the pits including the two Red Bulls and Hamilton which had watched the action to that point from the garage.

Rosberg then set the timing screens alight by shaving one tenth of his previous best to cover the 4.655km lap in 1:20.718s.

The surprise was Alonso only managing fifth fastest, one position ahead of Felipe Massa who had been involved in an incident in Q2 which impeded Webber.

The story of the weekend has been the diabolical struggle McLaren has had to deal with as it ushered in a host of updates to the MP4-28 Mercedes-powered cars.

The Woking team could manage little celebration with Jenson Button ousted in Q2, qualifying 14th while Sergio Perez progressed with a last gasp flying lap to make it into Q3 seventh fastest.

It was the first time the Mexican has out-qualified Button this season with Perez going on to ultimately qualify in ninth position.

Earlier during the third practice run Perez had a power steering problem and some of the directional vanes on the brake ducts flew off the car mid-lap.