Russell Ingall to compete with Stanley colours in Austin

Russell Ingall to compete with Stanley colours in Austin 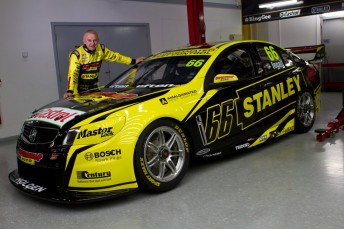 Russell Ingall with the Stanley Holden

Russell Ingall’s Supercheap Auto Racing Holden will compete in the colours of American tool brand Stanley at the Austin 400.

Stanley has been a co-sponsor of the Walkinshaw Racing prepared Commodore in recent seasons, with the product retailed in Supercheap stores throughout Australia and New Zealand.

Ingall’s livery is similar to that seen on the Richard Petty Motorsport NASCAR Sprint Cup car of Australian Marcos Ambrose.

“Stanley originated in the US, so it’s great to go over there promoting products everyone knows and uses, and a company which is a big supporter of SCAR,” said Ingall.

“We were team mates in V8s for three years and we still stay in touch; I’ll be catching up with him while I’m over there.”

The livery ensures that Stanley will go head-to-head with arch rival tool brand IRWIN in Austin, with the latter the season-long primary sponsor of the Lee Holdsworth-driven Erebus Mercedes.

Like all of his V8 Supercars colleagues, Ingall is talking up the prospect of an exciting weekend’s racing in Texas.

“I’ve watched the Formula 1 and MotoGP races at COTA and it looks like an impressive track with wide straights and plenty of passing spots,” he said.

“I reckon the V8 races will be the most exciting of the 2013 season.

“My team-mate James Courtney went over there last month and he told me all about it, so I can’t wait to drive it myself.”