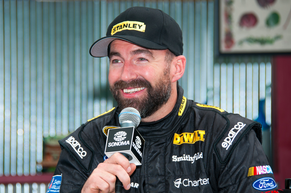 Richard Petty Motorsports drivers Marcos Ambrose and Aric Almirola have completed a two-day test at the Sonoma road course ahead of the Sprint Cup round there next month.

It was the first test of the new Gen-6 NASCAR at the Sonoma road course in California with the team completing close to 100 laps.

Indications are the that new car will be faster in qualifying trim at the circuit although no official times were disclosed from the test.

“We’re going to be faster in qualifying (with the new Gen-6 car), no doubt. It looks like the cars and tyres slide around more, so I think you’re going to see the normal Sonoma action, just a little faster,” Ambrose said.

Ambrose is desperately in need of turning around his season and is looking at Sonoma to crack an elusive win. He has won at Watkins Glen however is without a victory at Sonoma despite four consecutive top eight finishes there.

“I’m excited about the Gen-6 car. It’s been a good race car for us, and we came out here to give ourselves the best shot at winning. We had the pole here last year, but our race package wasn’t up to standard on the longer runs, so that’s what we’re really focused on.”