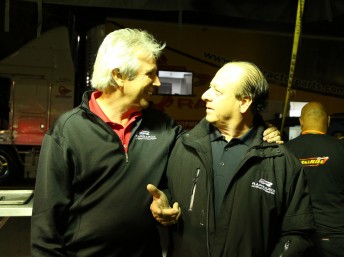 Scant details surround Beard’s departure, however he released a statement to US drag racing website, Competition Plus that ‘he had to do what was best for Lee Beard’.

“This was a business decision based on what’s best for Lee Beard,” he told CP. “I worked very hard on the Rapisarda operation to upgrade its cleanliness, organisation, appearance and performance. It was a tough decision.”

Beard’s intensity and methodical approach would, on the surface, appear to represent a stark difference to the Rapisarda team’s relaxed approach.

Those close to the camp believe tension has been building between Beard and Rapisarda for some time. Beard – who has steered 10 drivers to 53  final round NHRA victories – publicly expressed his surprise at Larry Dixon’s rear axle failure when visiting Willowbank Raceway over the Easter weekend.

During recent weeks in the USA,  Dixon has taken some strong forward strides for the Indianapolis-based Sydney team and is knocking on the door of the Mello Yello Top Fuel Series Top 10 Countdown, meaning Beard’s departure comes at a poor time for the operation.

Last weekend, Tommy Johnson Jr raced for Rapisarda at the Nitro Champs at Sydney Dragway, which didn’t yield anywhere near the success that the local team was hoping for.

It has been speculated in America that Beard has come to an agreement with Steve Torrence’s NHRA outfit – expediting his departure from Rapisarda. Torrence currently sits 13th on points – one place behind the resurgent Rapisarda team.

Team hopping isn’t new for the veteran, who has been with many top teams throughout his career – including John Force Racing and Don Schumacher Racing. Last year, in departing Cruz Pedregon’s Funny Car team he stated that Pedregon’s ego out stripped his talent.

Although Beard was part of a ‘package deal’ with Dixon coming to the Rapisarda team, his departure is not believed to have affected Dixon’s position in the team.