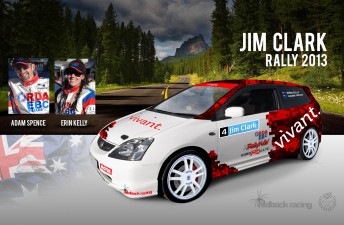 Leading Australian tarmac specialists Adam Spence and Erin Kelly will take on the famous Jim Clark Rally in the UK on May 31.

Spence, from NSW, and Queenslander Kelly are top contenders in the sealed surface Australian Targa Championship, recently winning the Showroom Class at Targa High Country in their Renault Megane RS 250.

The two-day National A-level event, consisting of more than 160km competitive stages on closed public roads around the host town of Duns in Scotland, is the only closed road rally on public roads in the UK.

Spence and Kelly will be up against competitors in the the UK’s premier rally series, the MSA British Rally Championship and are keen to see how they measure up.

“We leave in just over two weeks and I want to see how quick we are compared to those guys who I consider to be some.of the best out there,” Spence told Speedcafe.com

Inaugurated in memory of Jim Clark, Scotland’s first World Formula 1 Champion who was killed in a Formula 2 accident at Hockenheim in 1968, the rally was first held in 1970 as a round of the Shell/Motor World Scottish Rally Championship, and has been run every year since.

The Jim Clark stages have a reputation for being extremely fast with big jumps, ditches and hedges to catch out the unwary.

Crowd numbers in excess of 25,000 are expected at this year’s event, where over 3000 spectators can be crowded around a single corner.

“Erin and myself are living the dream by competing in the Jim Clark Rally,” he said.

“We decided to have a crack at a UK event, and this seemed the obvious choice as it has a mixture of everything. The roads are narrower than in Australia, but just as fast, and the jumps will be a real challenge.

“The car is now undergoing a full strip down and preparation for the event. I am looking forward to see how Adam adapts to the naturally aspirated Honda in comparison to the turbocharged Renault that he is used to.”