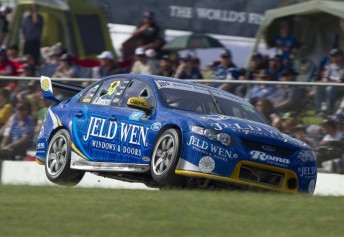 Primary driver Alex Davison was to have shared the Ford Performance Racing-prepared entry with Mostert prior to the 21-year-old recently stepping into a full-time V8 Supercars Championship ride with Dick Johnson Racing.

McIntyre, meanwhile, had been in danger of missing out on an endurance seat after a disastrous 2012 Bathurst 1000 alongside Will Davison led to him being shuffled out of a multi-year deal with FPR.

A front-runner in New Zealand’s V8 SuperTourer Series, McIntyre remains highly rated by many in the V8 Supercars paddock, including Schwerkolt.

“He was a consideration in my original line-up three months ago when Chaz was on the market and I saw some potential there,” Schwerkolt told Speedcafe.com of McIntyre.

“I don’t think everything went well for him at FPR in total; some of it his fault, some maybe the car’s fault and some the team’s fault.

“I don’t think it all worked, and when Chaz was relegated back to DJR I thought I’d give him a go.” 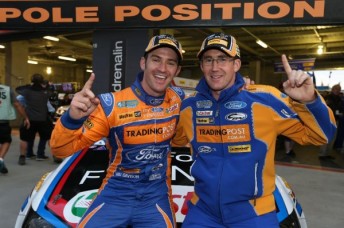 McIntyre, who worked closely with the Jeld-Wen Ford’s race engineer Campbell Little in the early part of last year’s inaugural SuperTourer season, says he’s rapt to be in the #18 car.

“It wasn’t until the end of January that I knew I wouldn’t be back in car #6 and a lot of people thought I was already taken,” McIntyre told Speedcafe.com.

“Considering who’s driving it, who owns the team, who’s engineering it and where the car is prepared we certainly came up with a gold watch out of a tricky situation.”

The 36-year-old says he took away a key positive from last year’s Bathurst, where a developing anti-rollbar failure triggered a series of dramas.

“When the car was good, I was leading the race,” he said. “That’s the main thing that I took out of it; I’ve led the race now and I led it on genuine pace.”

McIntyre is expecting that his SuperTourer experience will make for a relatively quick transition to the 2013 generation of V8 Supercars.

“The best reference are the guys that have driven both, like Scott McLaughlin and Shane van Gisbergen, who talk about some similarities mid-corner thanks to the 18-inch tyre,” he said of jumping between the cars.

“It’s something I noticed in the reverse last year when I went from the SuperTourer to the V8 Supercar. Straight away I felt the (Australian car’s) 17-inch tyre and how much it was moving around on the side-wall.

“I think the long distance races will come down to tyre management (again this year). It’s going to be really interesting.”

Schwerkolt meanwhile says he’s pleased with the way that his #18 team has been developing during the early stages of the season, with Alex Davison having qualified inside the top six for all three races last time out at Barbagallo.

“Perth was a great round for us obviously; we’re making steps at every round,” he said

“Things are starting to gel and Alex is getting a lot more comfortable in the car. Hopefully we can keep the momentum going.

“For the enduros I think we’ll just keep under the radar, chip away and see where we pop up. They’re a solid pairing.”

McIntyre and Alex Davison were both part of Stone Brothers Racing’s endurance squads in 2009, 2010 and 2011, but did not share the same car in any of those outings.