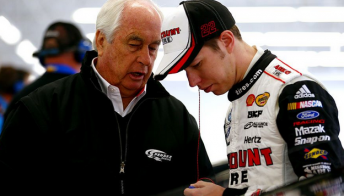 Roger Penske had a mini victory in a final appeal hearing with suspensions to seven of his crew members reduced from six to two NASCAR Sprint Cup points races.

The chief appeals officer John Middlebrook cut the suspensions to the crew members which arose out of violations to the cars of Brad Keselowski and Joey Logano at Texas on April 13.

However Penske was unsuccessful in appealing the 25-point deductions to the drivers and $100,000 fines to the crew chiefs which were upheld with the appeals process now at a close.

“Obviously, I’m very happy with the outcome,” Penske said at the NASCAR Research and Development Center.

“As you know, this sport has been built on innovation. All of us try to innovate in areas that are not defined in the rulebook.

“We were in that area. … to me, it’s past it now. We’ve moved on. I have to say again the process was very fair and equitable that NASCAR was able to provide for Penske Racing and our whole team.”