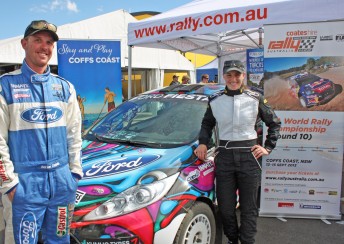 European based Australian rally driver Molly Taylor is a confirmed starter at the Scouts Rally SA at the end of the month driving a Ford for the Innate Motorsport Team.

Taylor will arrive race ready for the 24-26 May event after competing in a Citroen at the European Rally Championship Tour de Corse (Corsica) and she will have co-driver Seb Marshall alongside.

“I absolutely love Scouts Rally South Australia and am very excited to have the opportunity to compete. I have always wanted to come back and drive in Australia but needed to concentrate all my efforts in Europe.” Taylor said.

“The guys at Innate have made the car available and they thought it would be a good idea to do the Scouts Rally to allow the team and I to work together before the Australian round of the World Rally Championship. There is a gap in our ERC calendar after Corsica so it works out perfectly.”

Taylor is very comfortable in the Ford Fiesta R2, having competed against the best young drivers in the world in the 2011 WRC Academy, all equipped with identical Ford Fiesta R2s. In 2012 she switched to her current mount, a Citroen DS3 R3 and is contesting 8 rounds of the ERC this year with Italian based United Business.

Taylor will also drive for the team at Rally Australia in Coffs Harbour in September.

“I am looking forward to having Molly on the team. She has a huge amount of experience in the Ford Fiesta R2 and we are hoping to capitalise on this experience at the Scouts event as we work towards Rally Australia,” said Innate Motorsport’s Adrian Coppin.

“Having two cars running is a great result for Ford.”

Taylor will take on the two-wheel-drive entries from Honda, Renault and former WRC Academy driver Brendan Reeves who will drive a Mazda2.