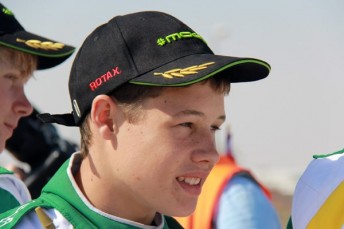 Porsche Carrera Cup driver and V8 Supercars regular, Michael Patrizi has attracted one of Australia’s hottest karting prospects in Pierce Lehane to his PatriziCorse Team for this weekend’s Carnival of Karts at Cockburn International Raceway, where the four times Australian Champion will make his KZ2 Gearbox debut.

Lehane – who has driven a variety of different categories to success including two Castrol EDGE CIK Stars of Karting Pro Junior Championships – will have an altogether different challenge this weekend. He will be on a circuit that he’s unfamiliar with, will take to the Birel chassis that regular driver, Kyle Ensbey took to the podium in Adelaide two weekend’s ago and will have to get used to the high powered six-speed IAME engine – which is to the specification raced in the World Championships.

A strong field will turn out for the Alloysteel International-backed event – which carries $15,000 in prizes. The KZ2 field includes the winner of the second round of the CIK Stars of Karting Pro Gearbox Championship and 2011 World Cup Champion, Dutchman, Joey Hanssen.

Sydney-sider Lehane – who is competing in the European Rotax Championships during 2013 –  was surprised and humbled by the invitation from PatriziCorse to make the one-off appearance when Ensbey had to pull out due to commitments in his home state of Queensland:

“Practice on Friday will be the first time that I’ve driven a gearbox kart, it’s going to be a lot of fun and I’m really looking forward to the challenge,” said Lehane.

“The opportunity really came out of the blue when Kyle was unable to make it, Michael Patrizi phoned me and asked me to fill in for the weekend. I’m grateful for the opportunity and really excited.”

The Carnival of Karts is expected to attract around 250 entries across the mammoth 12 classes to run across the weekend. Action will be private practice on Friday with proceedings kicking into top gear Saturday and finals on Sunday.