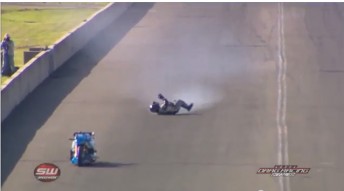 Chris Matheson escaped from this 370kph crash with only minor injuries

Australian Top Bike drag racing Champion, Chris Matheson has been fortunate to get away with some minor foot fractures after a frightful get off at the Nitro Champs in Sydney over the weekend.

A representative of Matheson’s Nitro Voodoo team confirmed to Speedcafe.com today that – after speaking with the Brisbane racer – aside from a few bumps and bruises, scans have shown he has multiple fractures in his foot.

It is miraculous that he did not suffer anything more serious in the high speed incident. It appeared to be a difficult run from the time Matheson left the startline aboard the Nitro Voodoo machine.

Matheson is still in hospital in Sydney for observation, however has been in regular contact with his team members and is in a stable condition despite the incident.

The same cannot be said for the Nitro Voodoo McBride Special which set the fastest ever drag racing motorcycle pass in Australia over the Easter weekend and holds the world record of 5.8 seconds, set with its previous owner in America.

After Matheson alighted at 371kph when crossing the line at the Eastern Creek venue, he rolled along the track, whilst the bike continued – its speed unabated.

The American-built bike went through the end of the bitumen section of the racetrack, over the gravel trap, through the catch netting, eventually slamming into the tyres at the deep end of the venue. Reports from the scene were that it sustained a significant amount of damage.

This isn’t Brisbane-based racer’s first argument with Sydney Dragway, in 2009, he stepped off after a mechanical failure. Whilst that step off was perhaps not as visually spectacular as this past weekend’s, the injuries were considerably more severe.

The next round of the 2013 Top Bike Championship will be conducted on the second weekend of June as part of the Fuchs Winternationals at Willowbank Raceway outside Ipswich.