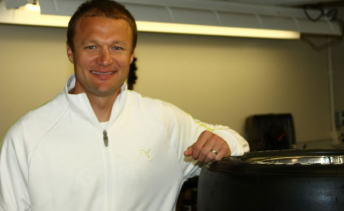 Commentator and part-time driver Townsend Bell will be re-united with Panther Racing for the 97th Indianapolis 500.

Bell will drive the #60 Sunoco Chevrolet that will run with livery from the DreamWorks Animation production Turbo.

The 38-year-old Bell drove for Schmidt/Hamilton Motorsports in the 500 last year when he finished ninth.

“We really want to thank Sunoco for giving us an opportunity to expand our program this May and bring a familiar face back to Panther. We take a great deal of pride in being able to compete at the Indianapolis Motor Speedway, and we feel like this addition really strengthens our effort with JR Hildebrand and Oriol Servia as we prepare to make another run at the Indianapolis Motor Speedway.”

“To be able to return to a top team like Panther and at the same time join up with Sunoco and DreamWorks is a special occasion,” Bell said.

The big build-up to the 500 starts this weekend with the opening practice runs at the Brickyard which continue  into next week ahead of the race on May 26.