Reeves impresses on US Rally debut

Reeves impresses on US Rally debut 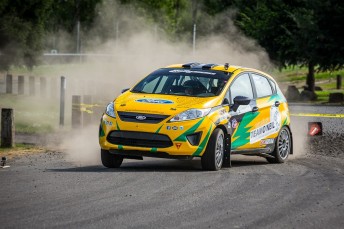 Brendan Reeves has turned heads on his US rally debut crushing the opposition in the two-wheel-drive category at the Oregon Trail Rally.

Behind the wheel of a Ford Fiesta R2, Reeves took to the Rally America Series event in Portland like a season professional winning every stage in the class and even finished fifth outright against turbo-charged four-wheel-drive entries.

The final margin was over three minutes in the class over the 17 timed stages.

“What an amazing feeling it is to come to America for the first time and win two-wheel-drive convincingly,” Reeves said.

“We had a trouble-free run thanks to Team O’Neil and the effort they put in. The Ford Fiesta was brilliant even on today’s blindingly fast stages, and Rhianon did a great job calling the notes.”

The Oregon Trail Rally was won by David Higgins in a Subaru with Ken Block (Ford Fiesta) second, and Rifat Sungkar third.

Reeves and Smyth will now return to Australia to prepare for their next event, Scouts Rally South Australia, round three of the Australian Rally Championship, which will be held from 24-26 May.