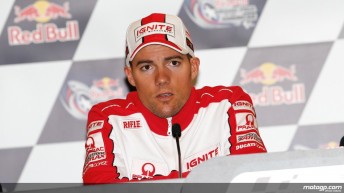 Ben Spies will make his comeback at Mugello later this month with Michele Pirro to replace him in the satellite Pramac squad for the next race, the French Grand Prix at Le Mans.

The Pramac team confirmed the replacement following the Jerez test in Spain while Spies continues to convalesce from a pectoral muscle injury.

Andrea Iannone rode for the team in the Jerez round last weekend while Pirro made his maiden wildcard appearance of the year for the Ducati Team.

After a medical check in Dallas, American Spies was advised that it was in his best interests to delay his comeback.

Iannone crashed out of the Jerez race after suffering from arm pump and will undergo surgery in Barcelona in the next day but is expected to be fit to return for Le Mans on May 19.