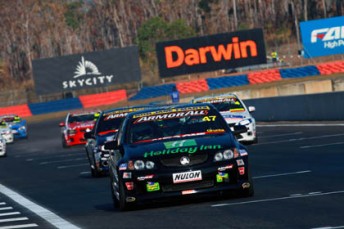 Hidden Valley to get much needed upgrades

The Northern Territory government has allocated almost $9.5million toward upgrades to the Hidden Valley circuit over the next two years.

NT sport and recreation minister Matt Conlan confirmed the investment for the circuit which puts the territory on the map each year in terms of national sporting competitions with the V8 Supercars round.

As part of the May Budget, $9.42million will be invested in the enhancements to the 2.9km circuit in work that will be carried out in two stages over the next couple of years.

At first $5million will be spent on resurfacing the track while concrete barriers will be upgraded to meet the national standards.

An additional $4.12 million will be set aside in 2014-15 to upgrade sewerage, toilet blocks and drainage and redesign the tricky turn one left-hander.

There have been calls for an overhead bridge/s to make traversing the circuit easier however this has not been outlined in the interim work planned over the next couple of years.

“Territorians are mad about motor sport and these upgrades will ensure Hidden Valley remains in peak condition so Darwin can continue to host national events like the V8 Supercars, the Australian Superbikes Championships and this weekend’s HQ Nationals for many years to come,” Mr Conlan said.

“Events like the V8 Supercars have multiple flow-on effects to tourism, local businesses and the economy – not to mention they are a great day out for the entire family.

Hidden Valley is subject to extreme weather conditions with soaring temperatures and monsoonal downpours and has not been upgraded since 1997.

“The normal life span of a track is 10 years, so 16 years on these upgrades are long overdue,” Mr Conlan said.

The current contract the NT government holds with V8 Supercars continues until 2018.

The NT administration was the first government V8 Supercars did a deal with when Hidden Valley first signed on as a round of the Championship Series in 1998.