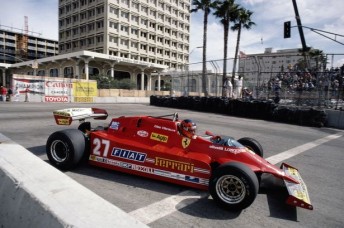 Gilles Villeneuve in the famous #27 Ferrari at Long Beach

F1 rainmaker Bernie Ecclestone has confirmed that a grand prix could return to the streets of Long Beach after more than 30 years.

The current agreement with the Long Beach promoters expires next year, paving the way for F1 to make a comeback to the storied Californian race.

Long Beach has played host to CART/Champ Cars/IndyCars since 1984 when it took over from F1.

F1 winners at the street track include some of the iconic drivers such as Clay Regazzoni, Mario Andretti, Gilles Villeneuve, Alan Jones and Niki Lauda.

Ecclestone confirmed to ESPN: “We are not in deep discussions with Long Beach but we have spoken to them.”

According to ESPN Zak Brown and Chris Pook, the founder of the Long Beach Grand Prix, are trying to buy the contract to the race from the current owners Kevin Kalkhoven and Gerald Forsythe.

Long Beach chiefs are insistent that the contract is not for sale and that the story of the race returning to F1-spec keeps resurfacing.

F1 last year held its maiden grand prix at the acclaimed Circuit Of The Americas track in Austin but is trying to find another race Stateside to complement the Texas event.

It has not ditched hopes of reviving its plan to hold a street race in New Jersey while a return to the West Coast also remains on the radar.