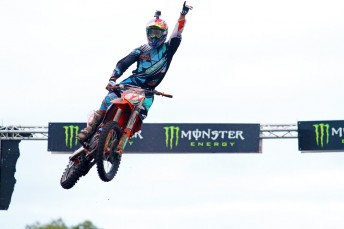 Todd Waters is showing some fine style in MX1 for KTM (PIC: MotoOnline.com.au)

Todd Waters is well on track for a victory in the 2013 Monster Energy MX Nationals after taking his Motorex KTM to its third straight round victory at Wonthaggi in Victoria, whilst Luke Styke extended his MX2 Championship lead and Jack Simpson moved to the lead of the MXD Development Series.

Waters’ domination – winning both motos – has led him to having a 44 point lead in the MX1 Championship over Matt Moss – who earlier set the GoPro SuperPole – taking the five bonus points towards his charge. After finishes of fourth and third in the two races, the SuperPole points were enough to elevate Moss to second for the round.

Monster Energy Kawasaki rider, Adam Monea drew a big response from the home crowd as he worked his way onto his first ever MX1 podium. He finished fifth in the first moto after a slight fall and finished second in the final race of the day after leading at one point.

Zero Seven Motorsport’s rider, Cody Mackie had to be taken to hospital after a heavy crash, whilst another on the injured list was Cheyne Boyd – who hurt his ribs after a collision with Yamaha’s Billy Mackenzie. Multiple Series Champion, Jay Marmont’s tough year continued, finishing 11th overall for the round.

In MX2, Yamaha pilot, Luke Styke took his second round win of the 2013 season, with victory in the opening race of the day and a second placing in the final moto. He set the pole time in qualifying before finishing behind Carlton Dry Honda racer, Josh Cachia in the last race.

Finishing second behind Styke was rapid teenager, Luke Clout and finishing third was another KTM rider in Kyle Makeham – his second podium of the year.

Victorian Jack Simpson continued his good run in the Pirelli MXD Development category for riders under 19 years of age. He won the first moto and finished third in the second moto – Kiwi Hamish Harwood finished second with a pair of seconds, while Joel Dinsdale was third overall – assisted by his win in the second moto.

The next round of the Championship will be conducted on May 19 at Broadford, also in Victoria.

CHAMPIONSHIP POINTS (After Round 3 of 10):