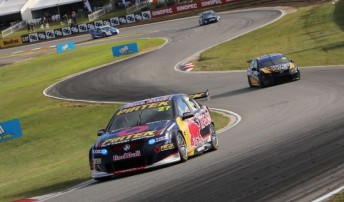 The 27-year-old finished a lowly 21st in points for the round after striking varying degrees of trouble in each of the three Dunlop Series races.

A promising 10th in qualifying quickly turned to naught in Race 1 thanks to a collision with Steve Owen’s slowing Ford on the opening lap – an incident from which he never truly recovered.

“It definitely didn’t go to plan,” reflected Stoner of the weekend, which netted race finishes of 21st, 21st and 20th.

“(But) we had a bad starting position in Race 2 and got caught up again in some more stuff, and Race 3 was just hectic.

“I was trying to keep myself out of trouble because there was stuff going on everywhere but I still managed to get myself in the mix somehow.

“We didn’t have much pace in the last race, we tried something different and it didn’t seem to work. We had better pace really with older tyres, which was a little bit disappointing.

“Honestly, it’s just time in the car,” he added of what he took out of the weekend.

“We’re just trying to learn and learn how to manage race situations a little bit better and get a little bit more out of the tyres, especially when they’re good.

“Hopefully we can do a bit better job next time.”

Stoner, who says he has yet to give any serious thought to whether or not he’ll compete in the V8 Supercars Championship’s endurance races later this year, had earlier been critical of other drivers racing particularly defensively in Race 1.

“I was a little bit disappointed with a few of them,” he said, having also had to fight through from last on the grid in the second race of the Adelaide season opener.

“I think they were blocking a little too much in my opinion and covering their lines back again.

“It made it impossible to overtake, it was very difficult. I was trying to put an overlap on them and they just kept on cutting me back again.”

Stoner says he’s looking forward to returning to a street circuit when the series resumes in Townsville in July.

“To be honest I really enjoy the street circuits so it’s something I’m looking forward to,” he said.

“Barbagallo is really nice, I love the layout, but in these cars it’s maybe a little bit long in the corners.

“They don’t turn the best in the middle of those corners, so I think it’s a track that is better suited to bikes.”

The Barbagallo round was won in impressive fashion by new series leader Ash Walsh, who shared the race victories with Jack Perkins and Dale Wood.