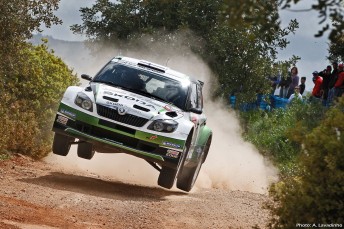 Lappi will campaign a factory-backed Skoda Fabia S2000 for the MRF team at the Sunshine Coast rally from July 12-14.

Double Indian champion Gaurav Gill will drive an identical S2000 in the rally which will start with a stadium-style Super Special Stage under lights at the Nambour Showgrounds.

The Works entries were announced by Skoda chairman Winfried Vahland at the car maker’s head base in the Czech Republic. It is one of the most significant manufacturer commitments since Malaysian car maker PROTON debuted two cars in 2010.

The 22-year-old Lappi speared to a clean sweep of the seven rounds in the Finnish Championship last year in a Skoda. He recently won the WRC2 category in the WRC round in Portugal.

Gill has driven for the MRF team since 2007. The team won the Asia Pacific Championship last year with Gold Coaster Chris Atkinson who is replaced by Lappi.

“Skoda’s entry to the APRC is an important step in terms of the brand’s growth offensive in international markets,” Prof. Vahland said.

“Asia is exactly the region where our ambition is to grow substantially in the coming years. Demonstrating local people’s enthusiasm about rallying, the APRC is one of the key motorsport competitions in this region, offering us a great opportunity to present our brand to a large audience.”

Australia has become one of Skoda’s most important markets in South East Asia since the brand launched here in 2007.

“Esapekka is a star in a country that breeds rally drivers like no other and by the time he arrives on the Sunshine Coast his skills will be honed to perfection by regular competition in the APRC, WRC and European championship,” the long-time Queensland Rally boss Bailey said.

“The activity supporting Skoda’s official involvement will undoubtedly raise the profile of our event. It will be a thrill to welcome Skoda-MRF, Esapekka and Gaurav to Queensland.”

Toyota will back a Vitz RS (named Yaris in Australia) for New Zealander Michael Young, Frenchman Claude Cavel, representing New Caledonia, and Hiroshi Asakura of Japan will visit Queensland for the first time and India’s Sanjay Takale will step up to the outright class with a four-wheel drive Subaru.

Three Queensland drivers, Bruce Fullerton, Simon Knowles and Matt van Tuinen, will join the championship from the opening round at the International Rally of Whangarei in New Zealand on 18-19 May, when Lappi also will make his debut.

Young’s entry in the APRC Two-wheel-drive Cup, Asia Cup and Junior Cup will be a joint venture between Toyota Racing Development (TRD) and Japan’s Cusco Racing, with support from Dunlop Japan.