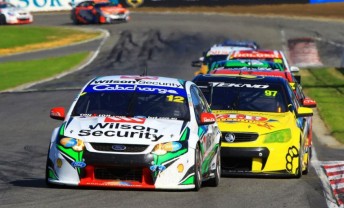 Ford Performance Racing team principal Tim Edwards says it was no surprise to see Chaz Mostert star on debut in the V8 Supercars Championship at Barbagallo.

The 21-year-old, who is on loan to DJR from the factory team, scored a best finish of 10th in the final encounter of the weekend on Sunday after earlier raising eyebrows by qualifying inside the top dozen for all three races.

DJR had enjoyed just one top 20 grid position across the nine races held prior to Barbagallo.

The 2010 Australian Formula Ford Champion’s first appearance in the top flight had been much anticipated after two strong seasons in the Dunlop Series.

“Of all the races to come in and first experience the soft tyre we probably picked the hardest one because it has more degradation than any other places we go to,” Edwards told Speedcafe.com of Mostert’s debut.

“He was always going to be a little bit on the back foot learning that, but he performed as I expected he would.

“I wasn’t surprised at all that he was so competitive. I hoped he’d get a top 10 result and that’s exactly what he did.”

Mostert appeared close to graduating to the main series for 2013 this year with FPR and later Erebus Motorsport, before seemingly being consigned to another season in the second division.

“Some of his peers from the Dunlop Series last year made the jump and have been doing a pretty good job, which has been a bit frustrating for Chaz, not getting his opportunity this year,” said Edwards, referring particularly to Scott McLaughlin, who scored a maiden main series race win last time out at Pukekohe.

Having shied away from pre-event predictions that he would star on debut, Mostert was all smiles as he received congratulations from both the DJR and FPR crews in the paddock on Sunday evening.

“All weekend my pace was around the 15th mark so I was pretty happy with that, I’ve just got to learn to conserve a bit and in time hopefully I pick up a bit more pace with experience too,” Mostert told Speedcafe.com.

“I was reasonably quick from start to finish in the races, which was good. It’s not like you’re out there having done a really blistering qualifying and lucked it and feel like you should be 20th or something.

“Our car definitely has the pace to stay around that top 10 mark and I’ve just got to perform that little bit more.”

Apart from understanding how to conserve the soft tyre and improving general fitness, the races showed that Mostert must also work on his pit box entries.

“Both were a bit tight,” he said of the first two pitstop races of his career on Sunday

“The first one I pulled up a bit short and the second one I was on a nice 45 (degree angle) on the way in. I think it’ll come with more races.”

Apart from the introduction of Mostert, the weekend also saw FPR engineer Adam De Borre step into the race engineer role on the #12 Ford; the pair both joining in on the factory team’s debrief.

“It was a little bit hard this weekend, both teams need to get in sync a little bit more,” said Mostert of the working relationship between the two teams.

“(But) it’s really good to have FPR’s data down at our end of the pitlane and it helps us to perform the best we can.”

Added Edwards: “It was a bit of a change but Adam knows our team, he knows the way we work and he understands the FPR way of going about things from the last two years at D’Albertos (former FPR customer Tony D’Alberto Racing).

“It’s just closening our ties with our fellow Ford competitors. There’s only six of us so we need to make sure that there are six competitive Fords out there.”

The V8 Supercars Championship now heads to a new venue in the Circuit of the Americas in Austin, Texas, where Mostert will potentially face a more even playing field.

“It’s a beautiful time to come into the series to race at a new track that none of these guys have really been on,” he said.

“I’m looking forward to that and hopefully we can put on a good show for the American guys. Hopefully we can get them to take their eyes off of NASCAR and convert some of them to circuit racing!”