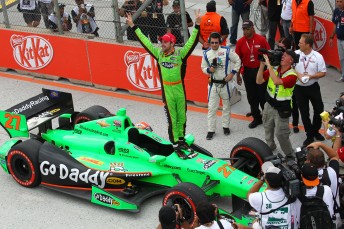 Canadian James Hinchcliffe pulled off a stunning last corner victory in a grandstand finish to the Sao Paulo Indy 300 in Brazil.

Takuma Sato was headed for his second successive win after his historic Long Beach effort however Hinchliffe overtook the Japanese driver on the final turn of the 75-lap race.

Hinchcliffe beat Sato at the flag by .3463s, turning around his previous two outings when he did not finish after winning the season-opening race at St Petersburg.

The victory means Hinchcliffe becomes the first Canadian to win in Brazil since the late Greg Moore in 1998.

“There’s no cooler way to win a race  — in the last corner of the last lap,” Hinchcliffe said.

“Takuma was making that race car really wide and he was defending the inside pretty well, almost too well a couple times. He just outbroke himself just a little bit and I was able to do a high-low (pass) and got the win.”

Sato inherited the lead when JR Hildebrand was called into the pits on lap 57 under a caution period.

On lap 72 Hinchliffe overtook Josef Newgarden and was .2180s adrift of Sato.

“That’s IndyCar racing. That’s what it’s about,” team owner Michael Andretti said. “It seems that so many of these races go down the last turn of the last lap. That’s what makes this such a great sport. I’m glad we came out on the good end of the stick for sure. It’s awesome to have two cars on the podium.”

Sato, who drove the final 38 laps on a set of Firestone alternate tyres, takes a 13-point lead over Andretti in the championship standings heading into the showcase Indy 500 on May 26

Helio Castroneves, who led in points in the first three races, is third after finishing 13th at 11-turn street circuit.

His Australian Penske team-mate Will Power started from 22nd and made up 11 positions before his Chevy caught fire putting him out of the race on lap 17.

“It was a really solid day for us. It was a great, great race, and we’re carrying good momentum into Indianapolis.”

Points after 4 of 19 rounds