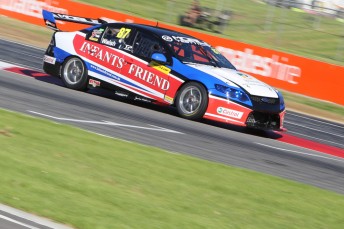 Second place in the final race of the weekend was enough for Ash Walsh to score a maiden Dunlop Series round victory at Barbagallo.

The Matt Stone Racing Ford driver started Race 3 on pole position courtesy of his first and fifth place finishes from the opening two encounters and led the opening 17 laps of the 20 lap finale.

Dale Wood eventually proved too strong for Walsh as the laps wound down, eventually sneaking by at Kolb Corner.

The MW Motorsport Ford had started from second on the grid but dropped behind Taz Douglas and Daniel Gaunt thanks to a poor start.

Wood recovered to second by the eighth lap before chasing down Walsh to secure a second career victory.

Jones was demoted to 15th post-race however thanks to a five second penalty for a false start.

Casey Stoner meanwhile spent the entire journey in the heart of the squabbling pack, starting and finishing 21st.

The 27-year-old’s race including a dice with Josh Hunter that eventually saw the Finance Ezi Ford dispatched into the Turn 6 sand trap.

Walsh now leads the standings by 18 points from Wood after two of seven rounds.

“I am really happy to get my first round win and be in the title hunt,” said Walsh, whose weekend had been hindered by losing two tyres after an incident in qualifying.

“We were in a major tyre battle over the weekend so to put the three races together to get this result is very satisfying.

“It is a long way to go but I think we are really in contention now for the Dunlop Series title.”

See below for the full round result