Tyre stops to spice up Sunday races at Barbagallo

Tyre stops to spice up Sunday races at Barbagallo 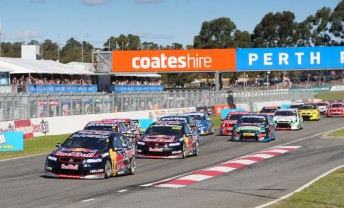 The V8 Supercars field during Race 10 at Barbagallo

There may not be any compulsory pitstops for the V8 Supercars at Barbagallo this weekend, but all signs point to a busy day of pit activity at the tyre torturing Western Australian venue.

The leading runners are all expected to stop for a tyre change in each of the two 100km races as attempts to squeak through on one set per race looms as a major gamble.

Lap times deteriorated at approximately 0.1s per lap during the two 60km Saturday encounters, with some then finding the degradation “cliff” in the closing stages of each 25 lap leg.

Simple linear degradation calculations suggest that cutting each 100km race into two stints will be around 10 seconds faster than staying out.

The argument for stopping is strengthened by the fact that the Barbagallo circuit is one of the easiest to pass on in the championship, while the pitlane is also one of the shortest.

As usual, the possibility of Safety Car periods will also have an impact on strategy decisions.

A full course yellow in the second half will seriously hurt anyone still on their starting tyre set, especially if they are forced to stack in pitlane behind a sister car.

“From what we’ve seen so far this weekend, it’s very, very hard to see how anyone can manage to do 42 laps on one tyre set,” Ford Performance Racing technical director Campbell Little told Speedcafe.com of the strategy situation.

“I wouldn’t be totally surprised to see someone take the gamble (and stay out), which could throw a cat amongst the pigeons, but they would really struggle in the second half.

“What I’d suggest you’ll see is people looking at where their cars fell off in the 60/60 races and pitting just before that happens, which will then trigger others in pretty quickly to cover them.”

The option of forgoing a second run in either of the qualifying sessions in order to have a set of completely unused tyres for the races may also throw a curve-ball into the afternoon.

Only Nissan Motorsport and Michael Caruso, however, proved brave enough to take such a risk on Saturday.

Starting just 25th after a late red flag hurt the strategy in qualifying, Caruso charged through to 11th by the end of the race’s second leg.

Several cars, including Caruso’s team-mate Rick Kelly, suffered tyre failures from straying off the racing surface at Turn 5 during Saturday’s action – another factor that teams will need to be wary of today.