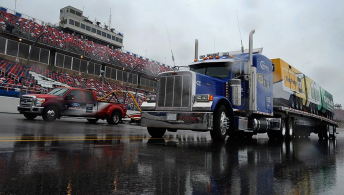 Persistent rain has prevented any chance of qualifying being staged at Talladega with Carl Edwards to start from the front by virtue of his practice time.

The starting line-up for the Aaron’s 499 will be determined according to NASCAR rules with Edwards setting the quickest lap in the opening practice session.

The #99 Roush Fenway Ford though does not win the Coors Light Pole Award.

It is the first time Edwards has started off the front since the Daytona 500 last year.

Joining him at the front will be Martin Truex jr in the Waltrip Toyota with Australian Marcos Ambrose starting from third as he tries to turn around his recent misfortunes in the Richard Petty Motorsports Ford.

“We were all driving like idiots out there in that first practice knowing it was probably gonna rain today and we just sort of had to get a run and try to make something happen,” said Ambrose.

“You always eliminate a lot of accidents if you can stay at the front like that, so our plan tomorrow is to drive aggressive all day and try to stay up there. We know that track position is gonna be a big thing for everybody even though it’s a plate race.

“There were definitely more runs yesterday, I thought, than what there was at Daytona as far as the cars getting more speed to make things happen out there, so I think it’s gonna be a great race.”

Next in the starting order will be Joey Logano and Ryan Newman.

The rain began falling at the Alabama track on Friday night and persisted right up until the qualifying which was scheduled just over midday on Saturday.

Comeback driver Denny Hamlin will start from seventh in his first race since California on March 24, one spot ahead of points leader Jimmie Johnson.

The Penske driver Brad Keselowski was the fastest in final practice but will be forced to start from 11th with NASCAR rules stipulating the field must be set based on opening practice results.

It was the second time this season Sprint Cup qualifying had to be abandoned following a similar occurrence at Texas in March.