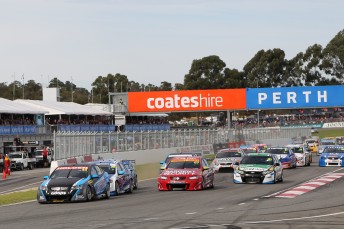 Jack Perkins has sustained heavy pressure from George Miedecke to take victory in the reverse top 10 grid Race 2 for the Dunlop Series at Barbagallo.

Perkins, who has returned to the series this weekend in an ex-Tekno Autosports Holden recently purchased by Eggleston Motorsport, made the best of the starts from second on the grid to lead pole-sitter Miedecke into Turn 1.

The duo were separated by less than a second for the entire 18 lap journey, with Miedecke twice drawing alongside his rival to no avail.

Andrew Jones and Paul Morris held their starting positions of third and fourth respectively throughout the race, crossing the line nose-to-tail three seconds adrift of the winner.

Starting from 29th after his failure to finish on Saturday, Owen had steadily picked his way through the field throughout the race.

Casey Stoner started and finished 21st after a mistake on just the third lap dropped the Red Bull-Pirtek Holden back to a low of 28th.

Another in trouble was front-runner Kristian Lindbom, who fell off the road at Turn 7 while battling for fifth with Walsh on Lap 6.

A second incident late in the going ensured the Evans Motorsport Ford took the flag one place behind Stoner in 22nd.

Cameron Waters also had a bad run, taking 23rd after a poor start and a mid-race incident.

The third and final Dunlop Series race of the weekend will get underway at 1615 local time.