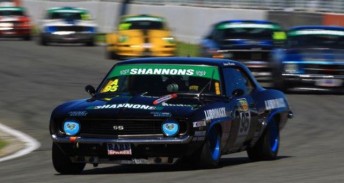 Andrew Miedecke walked away with the overall victory in Round 2 of the Touring Car Masters at Barbagallo after weekend dominator Michael Almond struck trouble ahead of the final.

Saturday winner Almond took a stunning victory in Race 2 on Sunday morning, fighting through from 10th on the grid under the reverse top 10 format.

The Porsche 911 RS failed to make the start of the evening’s third and final race however after breaking a CV joint on the warm-up lap.

Keith Kassulke was left to lead the early laps of Race 3 before the Falcon XB struck its own mechanical dramas, spelling retirement on just the fourth of 14 laps.

The Falcon Sprint of Jim Richards assumed the lead and was not headed for the remainder – the Bathurst legend eventually leading home Miedecke by 0.6s.

John Bowe meanwhile fell down the field to 13th in a clear attempt to miss the round podium, thereby reducing his parity restrictions for the following round.

That ploy failed, however, with the final points revealing Bowe third overall behind Miedecke and Richards.

The series continues with the V8 Supercars at Hidden Valley on June 14-16.