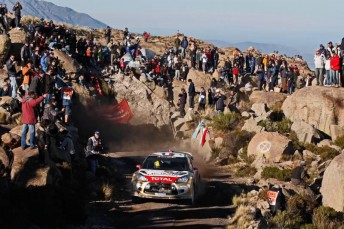 Loeb showed why he is the master in Argentina

Sebastien Loeb has taken what is expected to be his final gravel World Rally Championship win with victory at Rally Argentina.

The reigning nine-time world champion finished 55 seconds ahead of Sebastien Ogier, who had won the previous three events.

It was Loeb’s 78th world rally win and with the 39-year-old only compeiting in a limited programme of four rallies this season as he switches to circuit racing.

“It was a tough rally with complicated stages, but there was a great atmosphere and it was great to feel that all weekend.

“After so many months since my last gravel rally it was difficult to find the feeling in the first stage and to get the car working for me, but it was the perfect drive,” added Loeb, whose final WRC appearance is scheduled for France in October.

Such was the desire from the passionate Argentine fans to see Loeb’s farewell that an estimated 80,000 people lined the final El Condor stage.

Ogier dominated the early part of the four-day, 14-stage event, winning five of the first six stages in his Volkswagen Polo R. But he could not break Loeb, and when he went off the road for almost 40 seconds yesterday morning, Loeb transformed a 17 second deficit into a lead.

After puncturing a front left tyre on the next stage, Ogier was happy to throttle back, content in the knowledge that Loeb’s programme means he cannot be a contender for a 10th drivers’ title.

“It’s a good result for us,” said Ogier.

“We had a lot of problems this weekend but we’re happy to be at the end. We’re still in a learning year and at the moment, after five events, it’s going well so I want to thank the team for all the work they’ve done.”

“We had a few problems, even this morning, and I finished the rally with a car not really good, but still I managed to push and get extra points in the Power Stage,” added Ogier, who leads the drivers’ standings by 54 points.

Latvala won all four stages, including the bonus point-paying Power Stage, and his podium was secured when Novikov spun early in the final stage.

Video Highlights from the morning stages

Video Highlights from the afternoon stages