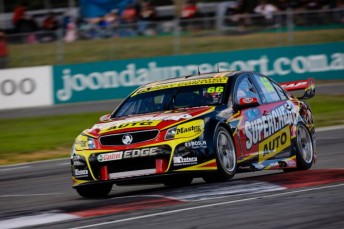 Russell Ingall and Todd Kelly have both been handed points penalties for incidents that occurred in the final race of the weekend at Barbagallo.

Ingall was relieved of 25 points for his role in an incident with David Wall during the closing stages that dispatched both Holdens into the Turn 6 sand trap, requiring the Safety Car.

The pair had been fighting for 13th at the time of the collision, which damaged both cars significantly enough that they could not return to the pits after being extracted from the sand.

Ingall had been handed a five grid spot penalty for Race 11 earlier in the day after swerving in front of Wall during Race 10 qualifying – causing the Wilson Security-backed driver to slide wildly across the infield and into the Turn 7 sand.

Ingall drops two championship positions to 17th thanks to the points penalty.

Todd Kelly meanwhile has had 15 points deducted from his season total for Race 12 contact with Alexandre Premat.

The Jack Daniel’s Nissan and Fujitsu Holden collided through the Turn 2-3-4 complex on just the fourth lap of the race – puncturing Kelly’s left-front tyre.

Kelly’s championship position of 26th remains unaffected by the penalty, with Maro Engel the only full-time driver placed lower in the standings.

Adding to Nissan Motorsport’s woes, the team was fined $3,000 for failing to attach Michael Caruso’s wheel sufficiently at the #36 Altima’s pitstop in Race 12 – leading to the right-front departing on the out-lap. Half of the total fine is suspended until the end of the calendar year.

The Sunday penalties follow a 15 point deduction for Jonathon Webb on Saturday after knocking Garth Tander into the Turn 7 sand trap early in the first leg of the Sixty-Sixty encounter.