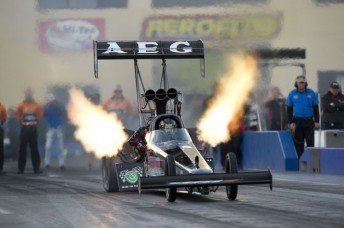 The returning Phil Read was second quickest in difficult qualifying conditions, whilst superstar American Tommy Johnson Jnr. had difficulty coming to grips with the Rapisarda Autosport International machine, failing to show his true potential among the small Top Fuel field.

Peter Kapiris set the pace in Top Doorslammer, setting a 5.79 second time at a new national speed record of 415.87kmh. Joining him in the stacked Doorslammer field was John Zappia, Murray O’Connor, Russ Pavey, Mark Belleri, Victor Bray, Stuart Bishop and Paul Cannuli.
“That was awesome, I knew it was quick,” said Kapiris. “It picks up the wheels in each gear change and I hit the parachutes and it nearly threw me through the windscreen. It’s surprising how much you can tell the difference with quick runs.
“We need to be careful not to lose sight of the prize in trying to run quicker. We will probably have to tame it down in the morning and then in the second round the track will probably be a lot better and we can step on it.”
The Pro Stock battle proved to be as close as predicted with 0.06 of a second covering the top 13 cars. Lee Bektash flirted with the magical six second bracket in his pass of 7.033 seconds to become quickest qualifier in his new Mopar Dodge Avenger.
Steve Ham set the quickest pace in Top Alcohol history in Australia with a 5.467 second pass.
Chris Matheson predictably set the pace in Top Bike, whilst Luke Crowley was the main man in Pro Stock Motorcycle.