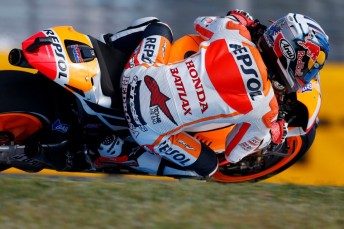 Dani Pedrosa has become the third different race winner, after three rounds of the 2013 MotoGP season, with victory at the Spanish Grand Prix.

Pedrosa took the holeshot but Jorge Lorenzo immediately hit back on the opening lap before Pedrosa’s race pace saw him pass the Yamaha with 21 laps remaining.

Lorenzo remained second until a persistent Marquez made a final lap pass in dramatic fashion, as he collided with Lorenzo on the final turn, pushing the factory Yamaha rider wide and into third.

Marquez was given the waving finger as he tried to confront Lorenzo in Parc ferme, who was clearly unimpressed by the Honda factory riders’s final turn pass.

Lorenzo’s disappointment in the move continued to show on the podium as he refused to cheers champaign magnums with the 20-year-old.

Valentino Rossi spent the majority of the Spanish Grand Prix in fourth, wrapping up his Jerez campaign one place shy of a podium result.

Cal Crutchlow rounded out the top-5 after swapping places with Grenisi Honda rider Alvaro Bautista for the final part of the race.

The race proved troubling during the opening laps with five riders all falling in the cool conditions.

The riders to go down were Yonny Hernández, Andrea Iannone, Stefan Bradl, Lukáš Pešek and Randy de Puniet, with the Frenchman disappointed in his short-lived Spanish GP.

“It was vey disappointing, I lost the front end into turn 9,” said de Puniet

“Today was not good for us. Zero points and only four race laps.”

Australia’s Byran Staring secured a career best MotoGP result to finish 16th after staring from 18th on the grid.

Moto 3 was cut short after a heavy crash involving Alan Techer who thankfully walked away with only minor injuries. The red flag falling indicated victory for Maverick Viñales with Luis Salom second and Jonas Folger third. Australian Authur Sissis was 12th on his Ajo KTM.