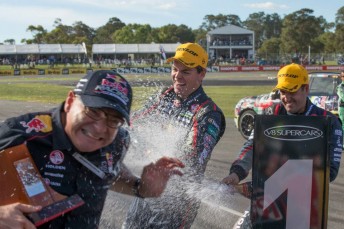 Saturday at Barbagallo proved a perfect outing for the Queensland-based outfit as a 91st career victory for Craig Lowndes saw the 38-year-old become the winningest driver in ATCC/V8 Supercars Championship history.

The result was also the first one-two finish for the team under the Red Bull Racing Australia banner, and comes less than eight years since Lowndes steered a Betta Electrical backed Ford to Triple Eight’s maiden V8 Supercars win at Eastern Creek.

“The thing that is so sweet about it is that every win is really earned this year,” Dane told Speedcafe.com, with Tekno Autosports, Brad Jones Racing, Garry Rogers Motorsport and Ford Performance Racing having all taken wins over the first 10 races – a sharp contrast to the two-team domination of 2012

“It’s so competitive and so close, which is after all what the formula was meant to deliver for the spectators, and you can see that being played out.

“It’s really, really hard to win this year, and that adds to the satisfaction, which I’m sure the others that have won this year will attest.”

Although standardising items such as the rear suspension has helped bring the field closer together under the ‘Car of the Future’ era, an increased spread of Triple Eight front-end components throughout the field also appears to have upped the pressure on the Red Bull outfit.

“We keep trying to dig harder and harder because we hate losing,” he said of his crew fighting against cars and components of its own design.

“The whole team hates it, it’s not just me, we’re all passionate about trying to win and put our best foot forward every time.

“Sometimes we don’t do a good enough job and other people do a better job, that’s life, but each time we get beaten by somebody we go back and dig deeper.

“And tomorrow can be a completely different story, which is the beauty of the category at the moment really.

“I don’t think there is anyone else in the world in touring car land that is producing the variety and the entertaining racing on a regular basis that we are.”

The level of competitiveness is only expected to increase throughout the season as new players Nissan and Erebus find their feet.

“It’s interesting to see how those guys are gradually playing themselves in,” said Dane of the new marques.

“Maro Engel (Mercedes) did an outstanding job in qualifying today and so did James Moffat (Nissan).

“They’ll get more consistently fast as the season progresses, which will put pressure on everyone. That’s the name of the game.

“From a parity perspective you can see how competitive the Fords are with the Holdens, and as the Mercedes and Nissans get on top of their own issues that they’ve had it’s only going to get more difficult to win.”