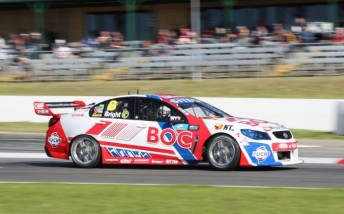 Jason Bright has taken his third pole position of the 2013 V8 Supercars season ahead of Race 11 at Barbagallo.

The Team BOC Holden completed two runs during the 15 minutes, but sat just seventh in the order with five minutes remaining – at which point the Ford Performance Racing Falcons locked out the top four spots.

Lowndes meanwhile managed third despite a scare mid-session that saw a lap ruined by Tim Slade’s slow Mercedes at Turn 3.

Chaz Mostert again impressed with 11th, while James Moffat (13th) and Lee Holdsworth (15th) were the first of the Nissans and Mercedes AMGs respectively.

A second 15 minute qualifying session will follow for Race 12.