Plenty of power still to find for Mercedes

Plenty of power still to find for Mercedes 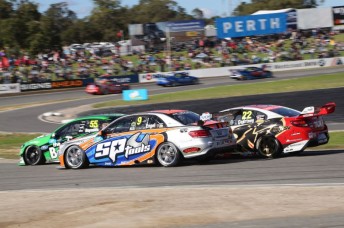 Entering the weekend with a best qualifying of 22nd and a season grid position average of just 25.9, the former DTM driver stunned all and sundry with the ninth fastest time in Race 10 qualifying.

The result came despite the #9 SP Tools Mercedes having endured problems with its new cable throttle package during all four practice sessions.

While the AMG engine’s eight-butterfly induction system has reportedly cured the motor’s driveability issues, Engel says that running in the top group during the early stages of the race quickly showed that it is still significantly behind its rivals in the power stakes.

“We are still a long way down on engine power unfortunately,” he told Speedcafe.com.

“That is still a big issue and especially caused the positions I lost in the first few laps, when the car (tyres) were still very good.

“It’s a big credit to everyone in Australia and in Germany to put these upgrades on the car and make us more competitive, but we need to put our heads down and work more.”

The team is expected to receive a second, power-focussed, engine upgrade prior to this year’s endurance races.

“Chris and the boys produced a great car for qualifying, but anything more (than one lap) was an unknown and obviously it wasn’t very nice in the race,” he said, having dropped to 25th place by the end of the second 60km leg.

The qualifying result, though, was enough to pep-up the team, which had faced a tough task to fit the engine upgrades to all three cars for the event.

“The aim and the hope going into the weekend was to get into the top 15, but to get in the top 10 surpassed all our expectations for sure,” he said.

“It was a massive boost for the whole team and it was so pleasing to see the smiles on the faces of all the cars.

“They worked so hard to get the cars here with all of the upgrades. I think Thursday night was a 2am job and they were back at the track at 6am ready to go again.

“The problem we had was that we had a sticking throttle that was around the 10 percent mark on Friday and even this morning.

“But the guys kept working at it trying to solve it, and they got it fixed for qualifying, but unfortunately I hadn’t had a chance to do anything like a long run before the race.”