Part-time master back at the top in Argentina

Part-time master back at the top in Argentina 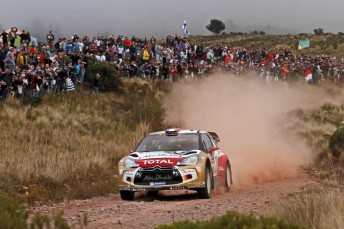 Sebastien Loeb may have been out of the driver’s seat in a rally car since February, but he is now set for victory at Rally Argentina.

As the challenge from those drivers around him fell by the wayside during an incident-packed second leg Loeb steered clear of trouble to build a 39.8 second lead.

Just four more stages and 77.92km stand between the Frenchman and a remarkable eighth straight WRC victory in Argentina.

“It was a very hard day for tyres and the cars,” said Loeb.

“I didn’t have any problems but I had to push hard because Ogier was pushing hard also. I expected it to be difficult and it was. I will try to be cautious tomorrow but I still have to keep a rhythm.”

Ogier won the opening stage of the day; his fifth victory in six tests and stretched his lead to 17.7sec, but it proved to be the last of the day for the Volkswagen Polo R driver.

In the next stage he lost the lead after sliding straight on at a slippery corner to allow Loeb ahead. Ironically, Loeb twice made a similar mistake on the morning stages but dropped a handful of seconds compared to Ogier’s 40 second loss, which relegated him to third.

Ogier attacked on the afternoon’s opening stage but he suffered a front left puncture and the championship leader eased his pace.

Despite the flat, Ogier climbed to second as Hirvonen punctured the rear right tyre of his Citroen DS3 in the same stage and lost 35 seconds. Worse was to come for the Finn when an electrical glitch in the following test cost almost six minutes and he fell to sixth.

Latvala tried to capitalise on Hirvonen’s woes but stopped to change a puncture after his Volkswagen Polo R landed in a hole after a crest.

The other big beneficiary was Evgeny Novikov. The Russian’s cautious strategy is reaping rewards and he is third in a Ford Fiesta RS, albeit more than two minutes behind Ogier and 8.2sec ahead of Latvala.

Video from the morning stages

Video from the afternoon stages