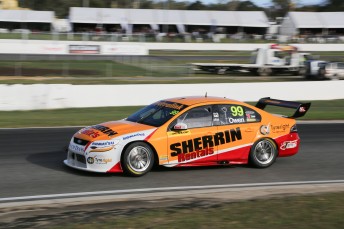 Steve Owen on his way to pole position

Steve Owen has made an ominous return to the Dunlop Series by taking pole ahead of his first start for MW Motorsport.

Owen and Walsh set their best times with 10 minutes of the half hour session remaining, knocking previous fast-man Kristian Lindbom to third.

Dale Wood was also able to edge Lindbom prior to a red flag period that set-up a sharp 1:40s final period of green flag running.

Lindbom was the only one of the top runners to return to the circuit for the restart, but failed to improve.

He will start sixth, behind Taz Douglas and Cameron Waters, thanks to a two-place grid penalty for careless driving in practice on Friday.

Filling seventh through 10th on the grid will be Daniel Gaunt, Paul Morris, Chris Pither and Casey Stoner.

The former motorcycle ace was the biggest improver during the dying seconds, jumping nine places.

The red flags flew after contact between Aaron McGill and Geoff Emery on the back straight flattened the right-rear tyre on the former’s Holden, pitching him into the Turn 7 sand trap.

A lengthy 10 minute stoppage had occurred early in the session to recover the cars of Aaren Russell from Turn 4 and Josh Hunter from Turn 7.

Russell had run through the Turn 7 sand trap on the previous lap and rejoined, while Hunter made a mistake on the same corner and clouted the fence.

Race 1 for the Dunlop Series will commence at 1250 local time.