McLaughlin quickest ahead of Race 10 qualifying

McLaughlin quickest ahead of Race 10 qualifying 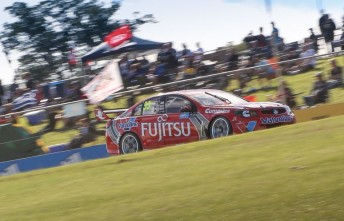 Scott McLaughlin has set the fastest time in the final practice session of the weekend ahead of qualifying for Race 10 at Barbagallo.

The Fujitsu GRM Holden driver jumped from 27th to the top of the order with six minutes remaining to edge previous fast-man Jason Bright by 0.11s.

Bright, another to save his best set of pre-marked tyres for Practice 4, set his best time during a rapid three-lap spell mid-session.

Alexandre Premat ended up third after running a near identical session plan to team-mate McLaughlin.

Will Davison had set the pace early before switching to a long-run program, completing a 17 lap unbroken spell that began in the mid-56s and ended in the high 57s.

Whincup meanwhile ran a 25 lap stint, replicating the exact duration of each leg of this afternoon’s Super Sprint format.

The Red Bull Holden driver recorded an early best of 56.19s before eventually sliding into the 58s.

Lee Holdsworth endured a spectacular off at Turn 4 late in the session, but proved that his car escaped unharmed by setting his fastest time of the 30 minutes on the following lap.

Less than a second covered the top 26 cars, while Maro Engel continued to suffer from throttle issues in his #9 SP Tool Mercedes, and was 27th.

Dean Fiore and Shane van Gisbergen were both forced to serve one minute pitlane hold penalties during the session after failing to illuminate the tyre light in their cars while running the soft compound on Friday.

The pair went on to set the 13th and 21st quickest times in the session respectively.

A 20 minute qualifying session will kick-off at 1205 local time.