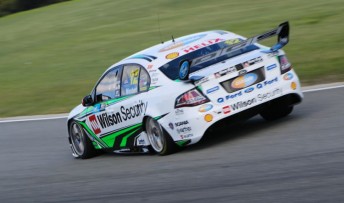 The two DJR Fords have been amongst the slowest cars in the field so far this season after the embattled squad struggled to simply make the grid for the opening round in Adelaide.

The 21-year-old Mostert is being loaned to the team by Ford Performance Racing, with which DJR has enjoyed a technical alliance since the beginning of the season.

“He’s done a good job so far and I think he fits in very well with the team,” Johnson told Speedcafe.com of Mostert, who replaced Kiwi Jonny Reid in the team.

“He’s driven these types of cars before, not so much the Car of the Future, but certainly in the Dunlop Series, and he’s shown an awful lot of promise which I’m sure will transfer to the main series.

“I think Chaz is going to motivate both cars in the team to move forward together. 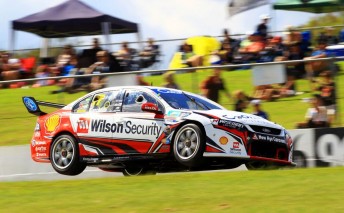 “(Team-mate) Tim (Blanchard) has sort of been a bit timid but I think he’s really going to get his act together now.

“He’s got the ability, it’s just a matter of believing in what he’s got beneath him.”

Johnson is adamant that his cars are as good as any in the championship, and it is up to his drivers and crew to get the most out of them.

“There has been no expense spared on these cars, they are as good as any in the pitlane here I can assure you, and they’re better than most,” he said.

With former primary backer Shell taking an increased presence on Blanchard’s car this weekend, Johnson hopes the Barbagallo meeting will go down as a turning point in the team’s fortunes.

“It’s a bit of a toe-in-the-water situation for three meetings at Perth, Darwin and Townsville, but if things develop, we handle it right and the results come I think it might progress from there,” he said of the Shell deal.

“It’d be good to think that we can be up among the front running cars, because once you get up there it makes talking to sponsors an awful lot easier.”

Despite a strong practice showing and a pre-event prediction from FPR front-runner Mark Winterbottom that he could star on debut, Mostert says he’s keeping his expectations in check, and that he’s making sure he is respectful of the category’s established drivers.

“It’s a whole different respect level coming out of a category that has a lot of guys in it that are weekend racers rather than doing it for a career,” he told Speedcafe.com of stepping into the main series.

“When you get up into a category where there are 28 professional drivers it’s very different.

“It’s especially intense at this track where there is 0.7s to a second for the whole field. You really need to be respectful and not get in anyone’s way, but do your lap when you have to do it.

“My biggest thing this weekend is to get right on top of qualifying and maximise a green soft tyre,” he added, having enjoyed the benefit of a green set of softs left over from a recent Morgan Park test hit-out in Practice 3.

“It’s a bit different than DVS (the Dunlop Series) where you have got 30 minutes to do two sets. There are more sets (for the weekend) and less time (per session) in the main game, so I’ve got to go and do more laps on tyres that I’m not used to here.

“(But) it’s not everything to have outright pace either, some of the races have a lot more laps than what I’m used to as well.

“This weekend I’m just looking to keep the car straight and in one piece and hopefully finish in that top 20 mark.”

Coincidentally, DJR is operating without its general manager Steve Johnson this weekend – the first time in decades that the former team driver has missed a V8 Supercars Championship event.