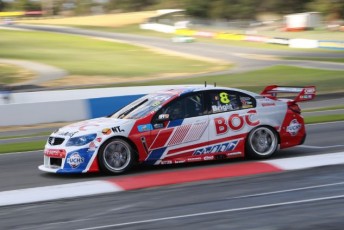 Brad Jones Racing is being billed as the ‘home team’ for next month’s Skycity Triple Crown at Hidden Valley after confirmation of a partnership between the pace-setting squad and the Northern Territory government.

BJR drivers Jason Bright and Fabian Coulthard will be involved in promoting both the event and general road safety awareness in the Territory under the deal.

The two Holdens are also now sporting NT branding on their front mudguards.

Local Minister for Tourism and Major Events, Matt Conlan, explained that the agreement is about attracting more visitors to the region.

“Territorians are passionate about motorsport so this partnership is a perfect fit,” he said.

“More than 48,000 attend the V8s at Hidden Valley and Territorians can now get behind their own car with Brad Jones Racing’s two teams in the championship, Team BOC and Lockwood Racing to feature Northern Territory branding.

“The V8 Supercars also stage a round in America and is broadcast to 137 countries around the world so this is an excellent investment as we aim to grow our tourism industry and attract more visitors to the Territory.”

While Bright with be unable to holiday in Darwin around this year’s race due to his commitments at the Le Mans 24 Hours, the experienced campaigner is hoping to make multiple visits during the year under the agreement.

“When I signed to do the Le Mans 24 Hours in France this year it meant I wasn’t going to be able to have my usual extra few days enjoying Darwin and the Northern Territory after the race weekend, which was a big disappointment,” he said.

“I always get up there at least once a year for a fish and hopefully this new association will mean I’m back up there for a few more visits during the rest of the year.”