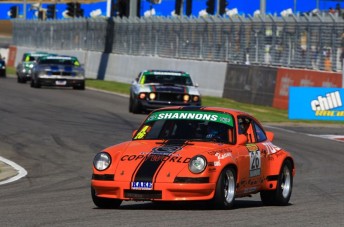 Almond blasted away from pole and was never headed

South Australian Michael Almond scored a maiden Touring Car Masters race win for Porsche in the opening hit-out of the weekend at Barbagallo.

The 29-year-old started from pole position and led every one of the 14 laps to beat home John Bowe (Ford Mustang) by almost five seconds.

The race wasn’t without drama however as an off from Gavin Bullas in the early going required the Safety Car.

“I didn’t expect that result at all,” said Almond of his maiden win.

“Having pole was fantastic, then it was quite daunting having Bowe in my mirrors during the race but I kept calm and put in some consistent laps.

“The reverse grid race is a whole different ball game. I’ve had a great run so far but know it’s going to get a lot harder from here.”

The Holdens of Ryal Harris and Tony Longhurst fought out second in the opening encounter, with the former eventually winning out after a small off from the two-time Bathurst winner.

Pretty started Race 1 from 32nd on the grid thanks to an engine failure in qualifying, moving to 18th by the flag.

That put him on the second row of the grid for the partial reverse grid Race 2, setting up the win.

Rhys McNally (Holden) took second in Race 2 and will start alongside Sieders on the front-row of the grid for the Sunday final.

The local Formula Ford and Saloon Car categories also enjoyed a race each as part of the V8 Supercars support program, with Scott Andrews and Grant Johnson backing up their Friday successes in the respective classes.