Sebastien Ogier puts a gap on the field in Argentina

Sebastien Ogier puts a gap on the field in Argentina 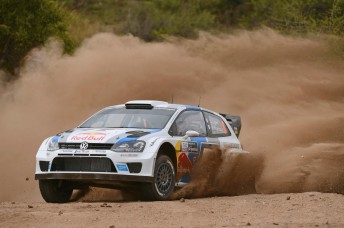 Sebastien Ogier is out front in Argentina

Sebastien Ogier has built a handy lead over Sebastien Loeb at the end of the opening leg of Rally Argentina.

The Volkswagen Polo R driver is 16.3sec ahead of the semi-retired Citroen DS3 pilot with Mikko Hirvonen in another DS3 just 1.8sec further back.

After the opening’s night’s short head-to-head Super Special, the first full day of competition was focused on two long gravel stages in the Sierras Chicas mountains and the Punilla Valley north of Cordoba.

After winning the Super Special, Ogier was fastest on Thursday’s opener to pull 8.8sec clear of the chasing pack, led by his Volkswagen team-mate Jari-Matti Latvala.

He lost half of that advantage on stage three, however, when he get stuck behind the Citroen DS3 of Dani Sordo who had rolled earlier in the test. But from then on Ogier was in dominant form, extending his lead with wins on the two repeated stages in the afternoon.

Returning to the WRC after nearly three months away, Loeb took some time to get back up to speed. He was 8.5sec slower than Ogier on the opening test but seemed to have rediscovered his mojo on the next test.

Latvala is fourth overnight, 22sec behind Hirvonen. The Finn had a day of mixed fortunes; from the highs of two second-fastest stage times, to the lows of a technical problem that left him without a handbrake on two stages.