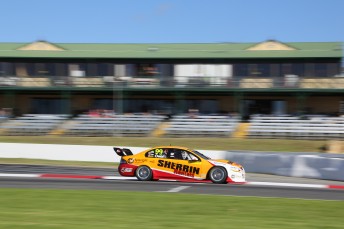 Steve Owen was third fastest on debut with MW Motorsport

Dale Wood ended the opening day of practice for Round 2 of the Dunlop Series at Barbagallo as the fastest man after a late red flag brought a premature halt to proceedings.

Wood had displaced new MW Motorsport team-mate Steve Owen from the top of the time sheets with 13 of the 40 minutes remaining.

The stoppage had been required to retrieve the Fords of Michael Hector and Nick McBride, with the former stuck in the sand at Turn 1, and the latter pulling off with a broken drive shaft.

Casey Stoner was an even second away from the pace in 15th after a session that included a late trip through the Turn 1 gravel.

The Dunlop Series field will return to the circuit for qualifying at 0830 local time tomorrow.