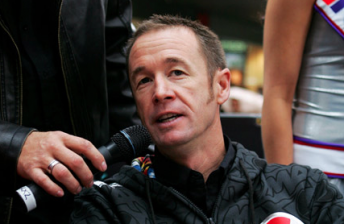 Beretta is currently busy with the Tour de Cure – a 10 day, 1521km bicycle ride between Adelaide and Canberra via the Snowy Mountains raising money for cancer research.

Murphy, who was part of Seven’s recent Pukekohe coverage as a support race co-commentator, will work alongside pitlane stalwart Mark Larkham.

“It was a bit out of left field and they were obviously very, very desperate,” joked Murphy to Speedcafe.com of the Seven call-up.

“No one else wanted to do it obviously, so they’re stuck with me backing up Larko in the pitlane, trying to keep up!

“Seriously though, it will be good fun, and it’s always entertaining to work with those guys (the Seven team).

“I’d much rather be behind the wheel obviously, but I was going to be in Perth anyway with some sponsor commitments, so rather than just standing around all weekend and dreaming about racing I’ll actually have some work to do.”

Murphy is without a full-time V8 Supercars ride this year for the first time since 1998, but will join the Holden Racing Team for the Sandown, Bathurst and Gold Coast endurance events.