HRT determined to go own way on development

HRT determined to go own way on development 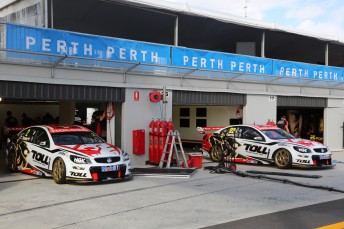 The Holden Racing Team Commodores in the Barbagallo pitlane

The Holden Racing Team’s major front-end upgrade will hit the track for the first time today at Barbagallo as the factory squad attempts to break the longest losing streak in its history.

It is understood that only the Garth Tander and James Courtney driven cars are running the revamped front-end in Western Australia, while the other Walkinshaw-built cars of Russell Ingall and Tony D’Alberto continue with the previous iteration.

Although the likes of Brad Jones Racing and Nissan Motorsport have joined Red Bull Racing, Tekno Autosports and Lucas Dumbrell Motorsport in using Triple Eight designed front suspension components this season, the HRT says that its front-end upgrades are the product of its own engineering department.

The front-end has been left as a key area of development freedom in the new-for-2013 Car of the Future rule package, which features a control, albeit highly adjustable, rear suspension design.

“We are doing our own thing, our own way,” HRT performance director Tony Dowe told Speedcafe.com of the latest update, emphasising that it is a continuation of the team’s ongoing development program.

“(If you bought key components from other teams), you’d only be as good as them, wouldn’t you? We want to win.

“Frankly we have some very bright people in the company and the areas we’re giving people direction into improving our situation are coming up with the goods,” he added.

“That’s why you employ good people.”

Despite speculation that a switch could be on the cards, the Walkinshaw cars continue to run the Ohlins shock package. The remaining 24 cars in the field use Sachs, which is distributed in Australia by Triple Eight.

The HRT’s development push this season comes through an engineering department that has been significantly restructured over the last six months.

Overseen by Dowe and fellow Briton Steve Hallam, the changes included relocating the engineering offices within the squad’s Clayton facility and implementing its ‘car manager’ and ‘performance engineer’ method of race engineering.

“It’s got better, it really has,” said Dowe of the way the team’s engineering department functions.

“I think it took a bit of time to gel but I see it getting better and better.

“The communication, everything is going the right way. It can always improve, but we’re very happy with the way it’s going.”

An engine upgrade – developed offsite by independent engine builder Roger Higgins – is scheduled to be introduced at the next event of the V8 Supercars Championship at Austin, Texas, in two weeks time.

The HRT has scored four podium finishes so far this season, but remains without a victory since Bathurst, 2011.