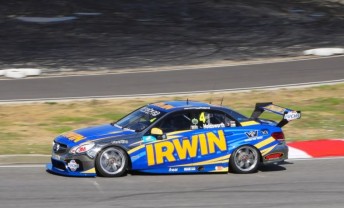 Lee Holdsworth on track at Barbagallo

Lee Holdsworth is confident that the Erebus Motorsport Mercedes entries are now genuine top 15 contenders after enjoying his first full day with the upgraded AMG engine package at Barbagallo today.

The team rolled out the upgrades, consisting of a revised induction system and cable-operated throttle, on all three of its entries for Barbagallo after an initial hit-out at Morgan Park last week with Maro Engel’s car.

The team spent the day fine-tuning the new system in addition to undertaking the usual Friday chassis tuning.

The pair were just 0.4s shy of pace-setter Will Davison and, while differing pre-marked tyre condition made for typically mixed sessions, Holdsworth believes that his team is genuinely knocking on the door of the top 10.

“It’s much better to drive with the upgrades that we’ve got – driveability isn’t an issue anymore,” said Holdsworth, who spent 10 laps in Engel’s car during the Morgan Park test.

“We were running top 15 all day and I think where we finished today genuinely shows where we are with our pace.

“My goal was to be in the top 15 every session and we’ve started off the weekend hitting our goal.

“Sladey is up there too which shows that both cars have got speed. We obviously need to chase a bit more speed to get a bit further up but we’ve got overnight to do that.”

Ironically, it was Engel’s car that proved the most troublesome throughout the day – the German suffering with a partially sticking throttle in Practice 3.

Team manager David Stuart told Speedcafe.com that the throttle cable will be replaced on the SP Tools entry prior to Practice 4 tomorrow morning.

Engel ended the final Friday session 23rd on the time sheets, 0.3s behind his team-mates.