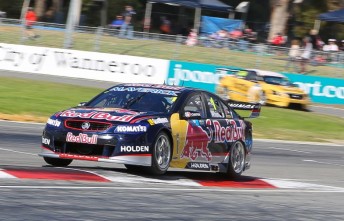 Jamie Whincup proved just 0.0045s quicker than Fabian Coulthard, with the duo setting their best times in quick succession at the halfway mark of the 30 minute hit-out.

Coulthard had spent much of the opening 15 minutes in the pits after reporting an engine problem on his out lap.

The Lockwood Holden jumped immediately to the top upon returning to the track, although continued to operate without a working dash for the duration.

As usual, the times were polluted by differing tyre quality, with both hard and soft compound pre-marked tyres allowed in the two set practice allocation.

Those towards the tail of the field included the three Walkinshaw Racing entries of James Courtney (23rd), Garth Tander (26th) and Russell Ingall (28th.

A third and final 30 minute practice session will take place from 1315 local time.