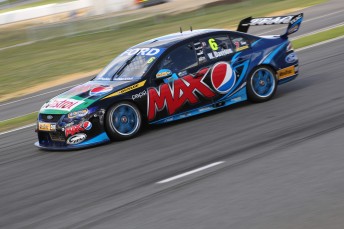 V8 Supercars Championship leader Will Davison came out on top after a late flurry of fast times in the third and final practice session of the day at Barbagallo.

Teams rolled out the best of their practice tyres of the final 10 minutes of the half hour hit-out, with Davison the first to eclipse Jamie Whincup’s fastest time of 56.37s from the preceding session.

The Pepsi Max Ford driver then went quicker again on his following lap to leave the benchmark at 56.22s before spending the final minutes in pitlane.

Davison later noted that he had dropped a wheel off the road at the exit of Turn 6 on his fastest lap, costing crucial time.

Whincup got closest to Davison’s time in the dying seconds but fell 0.03s short.

Fabian Coulthard, Mark Winterbottom and Craig Lowndes completed the top five, while Scott Pye, who missed Pukekohe after a crash at Symmons Plains, was sixth.

The Holden Racing Team Commodores lifted themselves from the bottom of the order in the late flurry.

Despite differing tyre quality, just a single second split the top 25 runners at the end of the 30 minutes.

Jason Bright ran towards the top of the order during the early stages of the session but was one of several to elect to save their second set of pre-marked practice tyres for Practice 4 on Saturday morning.

Tim Blanchard did not complete a flying lap in Practice 3 after his Dick Johnson Racing Ford stopped at the exit of Turn 1 early in the going – triggering the only red flag of the day.

The car is expected to undergo an engine change prior to this afternoon’s passenger ride session.