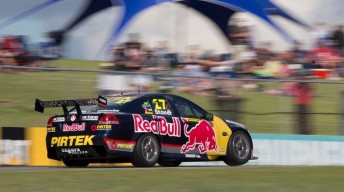 Casey Stoner on track at Barbagallo

Casey Stoner says he’s not optimistic of a strong showing in his second Dunlop Series appearance at Barbagallo this weekend after a difficult opening day of practice.

The #27 Red Bull-Pirtek Holden managed just 15th in the afternoon’s practice session, two places down on his morning effort.

Stoner’s afternoon included an off and subsequent trip through the Turn 1 sand trap with eight of the session’s 40 minutes remaining.

His subsequent final run was then halted prematurely by a red flag that ended the day’s proceedings.

“We’re not overly optimistic for tomorrow – I think we’ve got almost too much work ahead of us,” said the former MotoGP champion.

“A session which we should have spent fine-tuning ourselves on the track we spent trying to get back to where we were in the first session.

“Tomorrow we’re going to have to try a lot of things in qualifying, try and get our pace up a little bit so we can qualify a bit better and see what we can do for the race.

“It’s not been the easiest day. We’ve got a lot more changes to do and we needed those few laps in the afternoon that were unfortunately taken away from us.”

Stoner currently sits just 23rd in the Dunlop Series standings after crashing out in the first of the two races at the season opener in Adelaide.