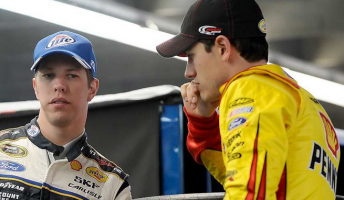 The three members of the National Stock Car Racing Appeals Panel unanimously upheld the fines that resulted from rear-end parts that were confiscated from the cars of Keselowski and Logano ahead of the Texas Motor Speedway on April 13.

“Obviously, a disappointing outcome with the panel,” Penske said.

“We met with the panel probably for over four or five hours. It’s a good process. I feel we have a good case, and we’re allowed to under the NASCAR rules in the rulebook to appeal this to the next level. We’ve notified NASCAR that we will go ahead and appeal this ruling today to the next level. Because of that, I really can’t make any other comments.”

Keselowski and Logano were each docked 25 points by NASCAR after officials confiscated the rear-end housings in the  #2 and #22 cars during inspection prior to the Texas race.

Paul Wolfe, crew chief on the #2 car, was fined $100,000 and suspended for six points events plus the Sprint All-Star Race, as was Todd Gordon, his counterpart on the #22 car.

Travis Geisler, competition director for the Penske team and a former crew chief, was also suspended six weeks. All suspended personnel were also placed on probation through December 31.

The violations stemmed from infractions on the vehicles’ rear ends, leading to a rushed change-out of the confiscated parts during pre-race ceremonies at Texas, and forcing Logano to start at the rear of the field because NASCAR ruled his car did not make the starting grid on time.

Penalties followed days later, with NASCAR determining that the rear-end set-ups violated sections of the rule book pertaining to the correct size of mounting holes, and limitations on movement or realignment of suspension parts beyond normal rotation or travel.